What is the Difference Between Bioavailability Bioaccessibility and Bioactivity of Food Components?

The preparation of foods fortified with functional components requires integration of diverse aspects under evaluation. These include selecting of the appropriate source, detecting the bioactive compounds, applying separation and recovery techniques, performing toxicological assessments and finally making stability, activity and bioaccessibility measurements. At this point, it is important to define carefully the terms “bioavailability”, “bioaccessibility” and “bioactivity” (Figure 1) that are often used indistinctly to express similar functions. 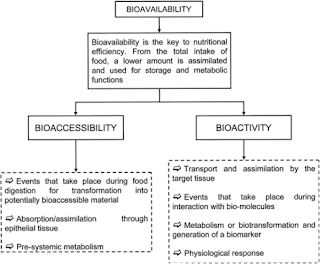 Bioavailability includes gastrointestinal (GI) digestion, absorption, metabolism, tissue distribution, and bioactivity.  However, it has several meanings depending on the research area used to. For instance, from a pharmacological point of view, bioavailability is the rate and extent to which the therapeutic moiety is absorbed and becomes available at the drug action site. From the nutritional point of view (that is of particular interest in the current book), bioavailability refers to the fraction of the nutrient that is stored or being available in physiological functions. It is a key term for nutritional effectiveness, as not all the amounts of bioactive compounds are used effectively by the organism. For example, when different foods come in contact with the mouth or digestive tract, various interactions may take place affecting phytochemical bioavailability (e.g. fat enhances quercetine bioavailabilty in meals). Therefore, bioavailability expresses the fraction of ingested nutrient or bioactive compound that reaches the systemic circulation and ultimately utilized.
Before becoming bioavailable, bioactive compounds must be released from the food matrix and modified in the GI tract. Thus, bioavailability includes the term bioaccessibility. Indeed, it is important to analyze whether the digestion process affects bioactive compounds and their stability, before concluding on any potential health effect. Bioaccessibility is defined as the quantity of a compound that is released from its matrix in the gastrointestinal tract, becoming available for absorption (e.g. enters the blood stream). This term includes digestive transformations of foods into material ready for assimilation, the absorption/assimilation into intestinal epithelium cells as well as the presystemic, intestinal and hepatic metabolism. However, beneficial effects of unabsorbed nutrients such as calcium binding of bile salts in the tract are missed by definitions based on absorption. Bioaccessibility is usually evaluated by in vitro digestion procedures, generally simulating gastric and small intestinal digestion, sometimes followed by Caco-2 cells uptake.
Read full article in my SciTech Connect Blog.
Posted by Charis M. Galanakis at 16:52